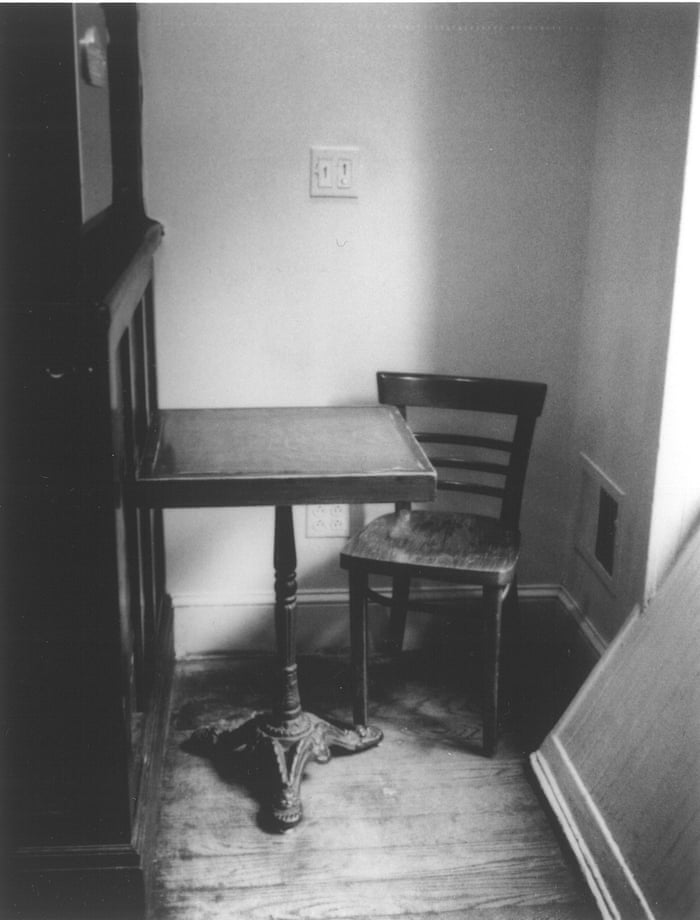 Having dabbled in seemingly every art form short of tapestry-making, photography is a relatively new medium for Smith. Smith is interested less in technical brilliance and more in capturing a moment. Her pictures, taken with an old Polaroid camera, are subjective, celebrating the play of light and shadow over a bed, or the flowers and high-rises surrounding a humble tombstone. The sparse white walls of the Robert Miller Gallery, which has been exhibiting Smith’s work since the ‘70s, draw attention to the elegant antiquity of the black-and-white photographs. Though taken recently, the photographs feel very old, even when a laptop or cell phone is visible. There is an intimacy too—as if we, the fortunate viewer, are invited behind Smith’s eyes to peer out at her poetry-draped world, at her daughter, asleep on the bed, or her late husband, posing beside a barn.

Some of the photos are self-explanatory. An abandoned silver balloon on the street. A peer, or a subway station. Stops on our tour through Patti Smith’s mind. For others, a quick consultation of the title adds layers of meaning. The crutches leaning against the wall belonged to Frida Kahlo, and the cane, belonging to Virginia Woolf, was found in the lake where she drowned. The stuffed bear was Tolstoy’s, the bandana belonged to Burroughs, and the revolver Smith surreptitiously photographed with her iPhone was used by Verlaine to shoot the great poet Arthur Rimbaud. To Smith, these artifacts are relics, memories of the artists who inspired her. Readers of Smith’s dreamlike memoir M Train will recognize the photograph of her beloved table and chair from the now shuttered Café ‘Ino, where much of the book was written. The table and chair, given to Smith after the café closed its doors, are included in the exhibit, beside a CSI-inspired bulletin board where Smith pinned up ideas and scribblings in her loopy calligraphy.

The exhibit complements M Train, which tells the story of many of the photographs displayed within the gallery. But viewers unfamiliar with the book will still find plenty to enjoy, in the mystery, emotion, and stories suggested by a succession of ghostly Polaroids.